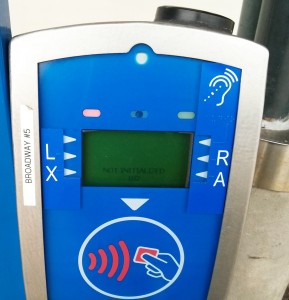 The good folks at my employer CommerceKitchen have set up its employees EcoPasses from RTD, aka the Regional Transportation District here in Denver. Since I recently moved to within walking distance of the light rail, I have only driven into work once in the last two months, and having a pass so I don’t have to think about it is both a money-saver. Having grown up in Albuquerque, I have a very long tolerance for traffic, so the light rail is a good fit. Overall, I like riding the light rail quite a bit.

However, the usability of the new RTD EcoPass, started in January of 2013, could be much better.  The first problem is that you have to scan your pass at all, which is a bummer when you’re trying to catch a train.

The screen is a larger version of those horrible 90s style LED screens last seen on crappy Casio watches that are hard to read in daylight, and the trip options of Local, Express and so on default to different settings depending on the station.  The buttons are the kind with horrible feedback, so even when you see the screen change, you feel like you haven’t pushed them.

I actively despise the EcoPass beep that happened when you scan your EcoPass. When it works, it makes a double fart. When it fails, it makes a single fart. I apologize to perfectly respectable farts everywhere for that slight. Both sound like scanning didn’t work.

I had encountered the single fart noise once or twice before without realizing what it meant, but recently I was accosted by two RTD badge checkers who were loitering 15 feet behind the EcoPass scanner and informed me that the single beep meant that the pass had not registered.  There is a sign, as seen in this paragraph, that says to ‘wait for a beep.”

How am I supposed to know that when the message flashes up for only an instant, I asked? As someone who used to, in his misspent youth, blip through all 99 analog cable channels, I can register changes pretty fast.  After many tries, I have determined that the success message is ECOPASS 12/13/2013. Very helpful.

Getting back to the conversation, I pointed out how horrible it was, and with bad “you can’t make this up” customer service instincts, they told me to call the RTD Customer Service number.

Not really an update:  There is now a sign telling anyone who has problems to call this number now, lest one might think that suggestion is an anomaly.

For the record, I have used the normal ticket system, and it’s nearly as bad. The screens are more legible, but then you get change in those dollar coins, which is very annoying, and the layout is wonky.